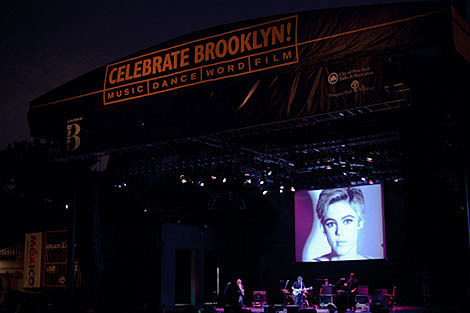 Dean and Britta launched their set and the film series in understated fashion with the "Richard Rheem Theme," a discofied electro composition as sleek as the coolly handsome Rheem, a wealthy Warhol hanger-on, himself. Things moved into high gear, however, with "Teenage Lightning (and Lonely Highways," D&B's jangly guitar-pop evocation of the equally handsome Paul Johnson, a speed-freak hustler and sometime Edie Sedgwick BF who practically commanded the camera with scowling bravado. (It bears mentioning that Johnson, who was struck by a car in 1982, was one of four screen testees in 13 Most Beautiful who came to an untimely end.) As for the Factory Girl herself, her slightly stunned onscreen affect (she was recuperating from a car crash at the time) juxtaposed hauntingly with the swooshing synthesizer flourishes of "It Don't Rain in Beverly Hills." Equally arresting: a tweedy pre-Easy Rider Dennis Hopper, nodding and laughing over a blues-rock instrumental; and future cult-film queen Mary Woronov, as severely beautiful as Rock 'n' Roll High School's Miss Togar yet with a glint of wry amusement.

Notwithstanding Dean and Britta's precisely tailored compositions, their most memorable musical selections were two covers: For Nico, Britta's folk-rock rendering of Dylan's "I'll Keep It With Mine" offered a honeyed counterpoint to the German chanteuse's almost-robotic version (not to mention Nico's fidgety, restless screen presence). And as Lou Reed in sunglasses nonchalantly chugged a Coke on screen, Dean shed his vocal reserve to growl out the great, obscure VU raver "I'm Not a Young Man Anymore." [EW.com]

Dean & Britta performed their "13 Most Beautiful... songs for Andy Warhol's Screen Tests" at the Prospect Park Bandshell on Saturday night (8/1) - part of the 2009 Celebrate Brooklyn series of concerts. The pair and their band (Anthony LaMarca and Matt Sumrow) played beneath projected film portraits. Crystal Stilts opened the free show which happened the same night Tool were headlining All Points West and M. Ward was playing guitar at Summerstage.

Dean & Britta's upcoming schedule of "Warhol" shows includes a number of not-to-far dates at places that include Philadelphia, Providence and Ithaca.

The band announced at their June LPR show that they wouldn't have any more non-"Warhol" shows (at least in the US) this year. One place you cans see Dean Wareham though, is at Union Hall, tonight (August 4th) for the venue's Stories in High Fidelity. He'll be reading with Village Voice music editor Rob Harvilla, and McSweeney's Dan Kennedy, and special guests. Tickets are still on sale.

Dean's writing credits (besides lots of song lyrics) include his memoir Black Postcards, which came out last year. Galaxie 500, which, with Luna, is one of Dean's former bands, recently remastered and re-released parts of their back catalog on vinyl.

A flyer for the Union Hall reading and all Dean & Britta tour dates, below... 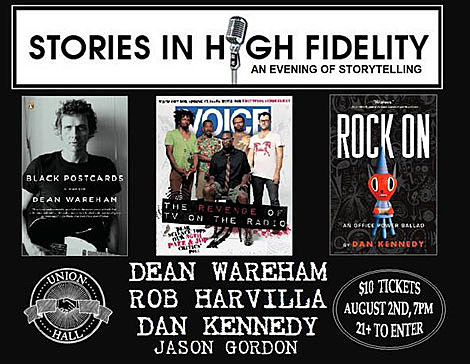