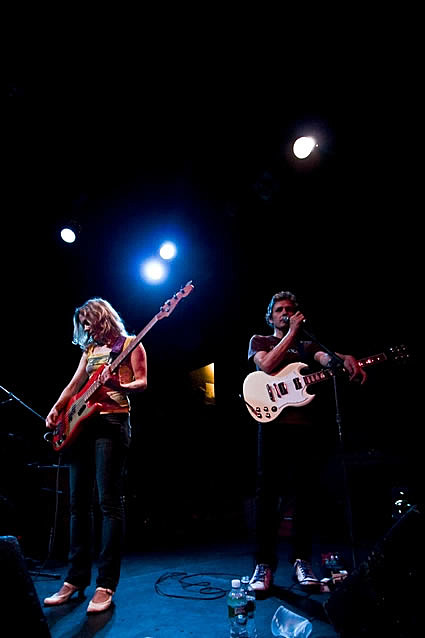 We [Double Feature Records] are releasing the debut by Cheval Sombre, produced by Sonic Boom, with musical contributions from Britta and myself. This CD contains tracks from his out-of-print 7" singles (issued on the UK label, Static Caravan), and a whole lot more. [Dean Wareham]

Dean & Britta head out for a short June tour with Cheval Sombre, whose debut album will come out on the Dean-and-Britta-run Double Feature Records on April 28th. The tour stops at (Le) Poisson Rouge in NYC on Saturday, June 6th. Tickets are on sale.

This Saturday (3/28), Dean & Britta's "13 Most Beautiful...songs for Andy Warhol's Screen Tests" show visits Boston. They did the same show in NYC in January. Dean & Britta, who were commissioned to write pieces for the collection of Warhol's silent films, have been out performing their original songs live, "beneath projections of Warhol's film portraits of his Silver Factory Superstars [who included Nico, Lou Reed, Edie Sedgwick, Dennis Hopper, and more]." Plexifilm just released a DVD version of the show on March 24th.

In April, Cheval Sombre is playing a few US dates with Dean & Britta's friend, and his record producer, Sonic Boom aka Spectrum. That includes the presviously announced April 26th show at Mercury Lounge (tix), as well as an April 29th show at Death By Audio in Brooklyn. Appropriately enough, a third date is at the Andy Warhol Museum in Pittsburgh, PA.

All tour dates and a video of Dean & Britta performing at NYC's Zipper Factory last September, below...