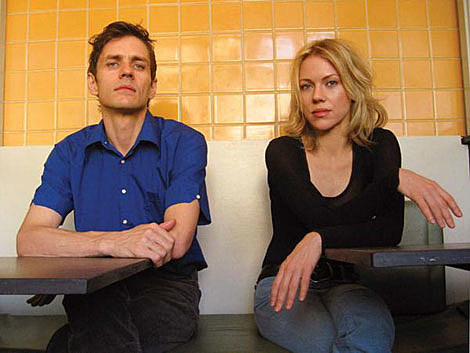 Southpaw is hosting two New Year's Eve shows this year. The first (7pm doors) will be Dean & Britta with special guests. The second (10pm doors) is An Evening with the Felice Brothers. Tickets for both the early and late shows are on sale now.

Dean & Britta's upcoming dates are a mix of "13 Most Beautiful...Songs for Andy Warhol's Screen Tests" gigs (like they did at Prospect Park in August) and regular shows. Between their pair of upstate New York shows this weekend (9/25 and 9/26) you can catch both versions.

The Felice Brothers honed their brand of urban country-rock busking in the New York City subway but they performed [at the Beacon Theatre] like true Yankee bleacher creatures. Riling up the crowd with songs like "Run Chicken Run" and "Whiskey in My Whiskey", their songs adhered to a hard-nosed insight, that's only gained through country experience, while leaving ample room for rural romanticism. Oddly enough some members seemed to effuse hip-hop onstage: Chains, flat-brimmed Yankee caps, hands pumping the rhythm, even bumping and grinding a washboard. [Pop Matters]

They're currently on tour of the South, into October. All tour dates are below...