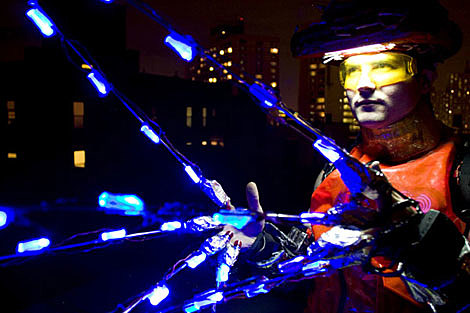 Double Feature Records presents Soft-Core, the first US release by My Robot Friend. My Robot Friend is a musical and performance art project born from the ashes of the late '90s NYC band Princess, which almost signed on to the legendary label Too Pure (P.J. Harvey, Stereolab) but broke up just in time. My Robot Friend performs in an elaborate light-up suit while interacting with illuminated objects, wireless video cameras and pyrotechnics. Think lovechild of a three way between Devo, Laurie Anderson....and a robot.

"Soft-Core" is actually My Robot Friend's third album, and anyone that spent any time at Luxx or exploring the electroclash scene probably recognizes that robot suit.

My Robot Friend (who has been known to cover Luna's "23 Minutes In Brussels") is appearing Friday, October 2nd show at 92YTribeca. Also on the bill are Cheval Sombre (with special guests), and DJing by Dean Wareham, who started the new Double Feature label with partner Britta Phillips. It makes one curious about the "special guests" that'll be appearing (yes, Dean & Britta will be there). Tickets are on sale.

Cheval Sombre, also on their label, opened for the Dean & Britta at LPR in June. At that show, the pair announced that it'd be their last non-Warhol show in the US for the year, but they played a regular set in Rochester last weekend (and will do one in San Francisco in October). Plus their New Years Eve show at Southpaw is still technically in 2009...

A My Robot Friend video below...