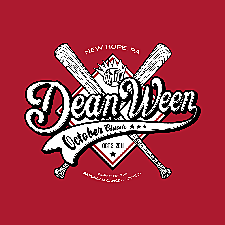 They're only really mentioning Dean, Gene (who will sing the National Anthem), Glenn McClelland (who will play organ) & Josh (who is not part of the reunited Kyuss), but I think that's enough reason to go to this Ween hometown charity event on Sunday (10/2). New Hope, PA is a beautiful place to visit anyway if you haven't been.

More Ween events, including Halloween at Hammerstein Ballroom, listed below...