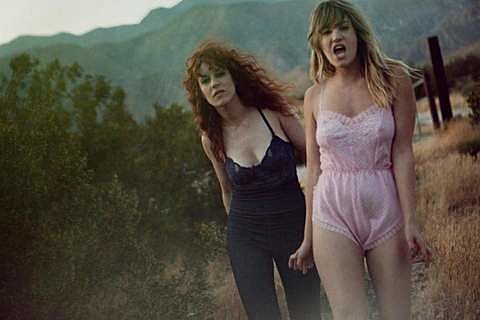 The 2012 CMJ Music Marathon is nearing and more and more shows are being announced for it every week. One of those happens on October 18 at Bowery Ballroom and has a pretty stacked lineup of MNDR, MS MR, Deap Vally, IO Echo, Sky Ferreira, and Gabriel Bruce. Tickets for that show go on sale today (9/26) at noon.

The Bowery Ballroom show is one of a few during and surrounding CMJ for LA duo Deap Vally, who we profiled earlier this month.

As mentioned, MS MR also open for Grouplove at Terminal 5 on November 2 (sold out). Their Candy Bar Creep Show EP is out now and you can preview it on tumblr or purchase it on iTunes.

As for MNDR, you can also catch them DJing at The Studio at Webster Hall tonight (9/26) (tickets) and on their tour with Shiny Toy Guns which hits NYC on October 30 at Santos Party House (tickets).

IO Echo released their debut album, Ministry Of Love, earlier this month via IAMSOUND will release their self titled EP on October 16 (the full length has been pushed back to next year) and you can stream their single, "When the Lillies Die," at the bottom of this post.

You also may have noticed that LA singer/actress Sky Ferreira, who has released some singles in the pop world over the last couple years, like 2010's "One" (produced by Bloodshy & Avant who are responsible for Britney Spears' "Toxic" and are 2/3 of Miike Snow), has been getting some internet love for her new single, "Everything Is Embarrassing" (produced by Dev Hynes of Blood Orange and Ariel Rechtstaid, who has worked with Cass McCombs, Glasser, and others). You can stream that track below.

Lists of dates and song streams below.

Sky Ferreira - "Everything Is Embarrassing"

IO Echo - "When the Lillies Die"