DBA crowd for JEFF the Brotherhood in Feb (more by Andrew St. Clair) 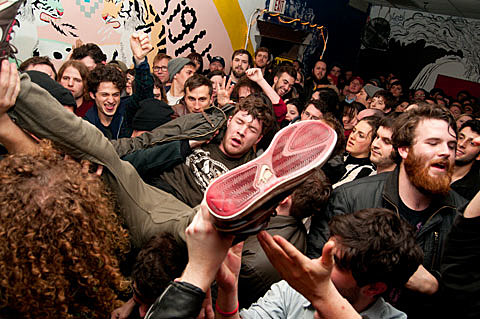 South Williamsburg DIY space Death by Audio will be five years old on March 31 and are throwing a birthday party for themselves featuring Neckbeard Telecaster, Grooms, Les Savvy Fav's Tim Harrington doing something solo, and Free Paint (Deerhoof's Greg Saunier and Flying's Sara Magenheimer). And maybe some special guests? Who can say?

While the 31st is the official anniversary party, all of March has been loaded with semi-official ones. Saturday (3/24) is a stacked bill, with Widowspeak, Eternal Summers, Bleeding Rainbow and Shark?. I actually saw the first three last week in Austin at various SXSW shows (like our Hotel Vegan day party on Friday 3/16) and all were in fine form.

While their were shows at what they called the Sugar Factory earlier (I remember seeing Dirty on Purpose and Vaz there during CMJ 2005), March 31 was the first show under the name Death by Audio (part of the space which Oliver Ackerman had been using since 2002 for his effects pedals company). I've seen so many memorable shows there (JEFF the Brotherhood, Thee Oh Sees, Ty Segall, METZ to name just a few) over the last five years. Here's to many more.