Death Cab at Beacon Theatre in 2012 (more by Toby Tenenbaum) 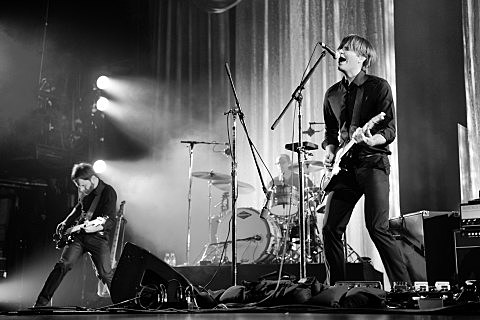 Death Cab for Cutie have slowly been announcing shows for 2014, including their upstate NY show on 5/23 with The Head and the Heart and Built to Spill, and the Boston Calling Festival, which they play on 5/24 with The Head and the Heart, Frank Turner, Jenny Lewis, Warpaint and more. (Built to Spill also play that fest the next day with Modest Mouse, Brand New, Kurt VIle, Phosphorescent and more.)

Now, Death Cab have announced a third show for that same week, and this one happens much closer to NYC on May 22 at The Capitol Theatre in Port Chester. Tickets for that show go on sale Friday (3/14) at noon. You can also still get tickets to their upstate NY show and to Boston Calling.

UPDATE: There's also an Atlantic City show on 5/25. All dates are listed below...