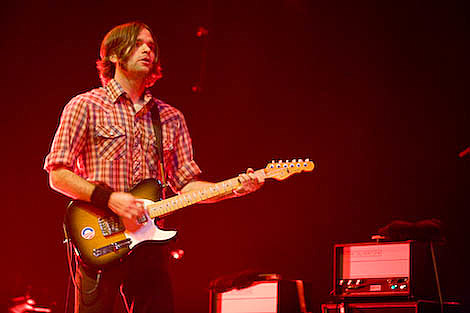 In addition to the previously-announced "limited 13 date run" of small venues in support of Codes & Keys, Death Cab For Cutie have announced a larger set of North American dates taking place later in the summer. Those include an NYC show at a venue a little bit bigger than (the way sold-out) Bowery Ballroom. Tickets go on fan presale on 4/29 and general sale Friday May 6th for DCFC at Williamsburg Waterfront on August 2nd with Frightened Rabbit who open a bunch of shows on the tour (as you can see in the list of dates below).

The Lonely Forest are Death Cab's tour-openers during the small-venue part. They play the sold out Bowery show, but you can catch them in NYC even sooner: they play NYC this Friday night, 4/29, with the Joy Formidable at Webster Hall. Tickets are still available. All dates from that tour are also below.

DCFC will also appear on a forthcoming episode of VH1's Storytellers (airing 5/27) and recently posted a trio of songs from their new album to soundcloud. Stream all three below alongside all dates below...

Death Cab for Cutie - Some Boys by ATL REC.

DEATH CAB for CUTIE - You Are A Tourist [Album Version] by ATL REC.

Filed Under: Death Cab For Cutie, Frightened Rabbit, Joy Formidable, The Lonely Forest, Williamsburg Waterfront
Categories: Music News, tour dates
Comments
Leave A Comment
Back To Top
Gathering of the Juggalos 2021 in (NSFW) pictures
Every Time I Die – ‘Radical’ review: metalcore lifers push the envelope on …
Review: Parquet Courts are in the groove on terrific new LP ‘Sympathy For L…
What’s Going on Friday?
GoFundMe launched for Russian Circles after gear stolen
System of a Down reschedule shows after Serj Tankian tests positive for COV…
15 New Songs Out Today