words and photo by Melissa Presti 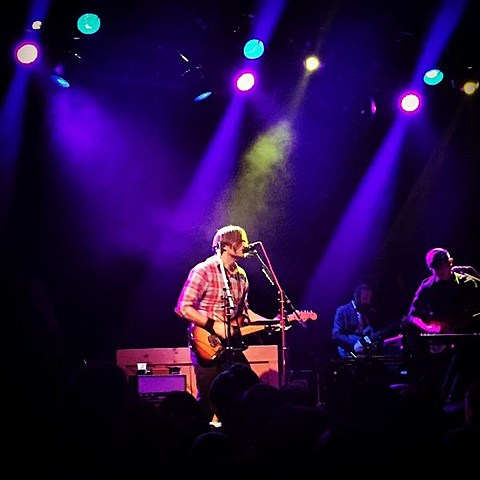 Death Cab for Cutie have an upcoming tour with The Antlers in support of their forthcoming album Kintsugi, but ahead of all that they squeezed in a last-minute, intimate one-off at NYC's Music Hall of Williamsburg on Wednesday (1/28) with Say Hi.

The 90 minute set was a showcase of all the Death Cab hits and favorites, and a peek at a few impressive sounding tracks from Kintsugi. "Black Sun", "The Ghosts of Beverly Drive", and "No Room in Frame" (all three of which were debuted in Seattle a week earlier) gave the impression that even for an eighth studio album, Death Cab is still reinventing themselves, this time with more electronic textures and synths in the mix.
Ben Gibbard apologized for the album delay, citing "we had a lot of shit going on" -- perhaps referring to personal relationships, his solo release, his reunion tour with The Postal Service, or most likely the departure of Chris Walla. Ben made the round of introductions between songs, making sure the crowd knew Dave Depper (on guitar/keyboards) and Zac Rae (keyboards) were more than qualified to step in and keep the band's nostalgic sound intact.

Before the night ended, Ben announced the next time they would play in New York would be at Madison Square Garden - encouraging everyone to tell their friends. "Seriously, tell your friends...it's a huge place." Stay tuned for more info on that.

The following night, Death Cab appeared on Letterman to perform "Black Sun." Watch that, plus videos and the setlist from MHOW, below...

Death Cab For Cutie - "The Ghosts of Beverly Drive" at MHOW

Death Cab For Cutie - "Title and Registration" at MHOW

Death Cab For Cutie - "No Sunlight" at MHOW

Encore:
I Will Follow You into the Dark
No Room in Frame
No Sunlight
Transatlanticism