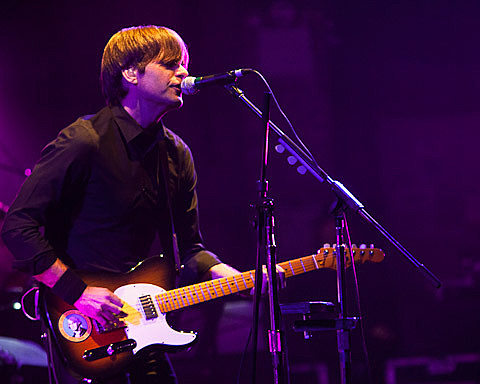 We already knew that Death Cab for Cutie's next NYC show would be Madison Square Garden, and today they announced that it would happen at MSG on September 12 with killer support from Explosions in the Sky. Tickets go on sale Friday (2/13) at 11 AM with AmEx, local, and Citi presales starting Wednesday (2/11) at 11 AM.

Their tour also includes another appearance not far from NYC at Radio 104.5's Birthday show on May 10 at Susquehanna Bank Center with Passion Pit and others. Tickets for that are on sale now too.

In related news, Explosions in the Sky member Mark T. Smith and Eluvium's Matthew Cooper have a new album coming out as Inventions called Maze of Woods on March 17 via Temporary Residence Ltd. You can watch a new video from that below.

Also, Ben Gibbard recently filmed a video of him playing DCFC's new single "Black Sun" acoustic for SiriusXM, and you can watch that below.

UPDATE: The band have now put out a new video for "Black Sun" and added a few more tour dates. Those are listed, with that video, below...