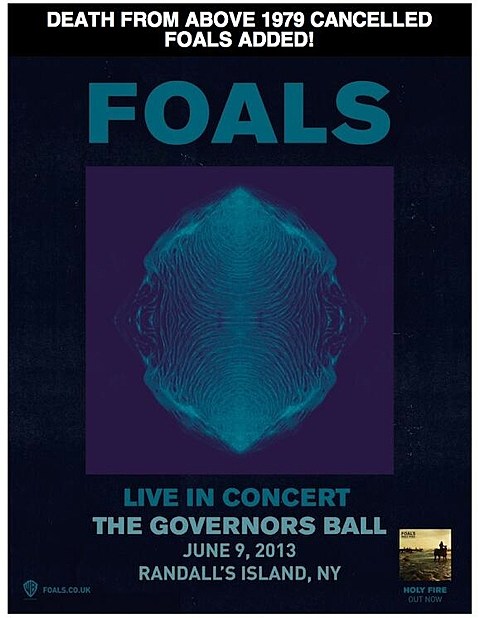 The picture above (via Governors Ball's Twitter) pretty much says it all. Death From Above 1979 have cancelled their appearance at this year's Governors Ball, which is especially unfortunate considering they were one of the ten bands we're excited to see. Apparently they're in the throes of finishing their new album and can't make it.

DFA1979 were also supposed to play Governors Ball afterparty with Fucked Up on Friday, June 7 at Irving Plaza, and that has been cancelled too. Refunds are available at point of purchase.

Taking their place at the actual festival is Foals, who just brought their tour to Terminal 5 last Friday (5/3) for a fairly insane, hyper-energetic shows. The crowd was pretty much going bananas the whole time (as was singer Yannis Philippakis who spent as much time in the crowd as onstage) so this seems like a good addition to Governors Ball, even though DFA1979 will be missed.

Regular Governors Ball tickets are totally sold out, but you can still get VIP Passes for Friday or all three days.