Death Grips at MHOW in 2012 (more by Fred Pessaro) 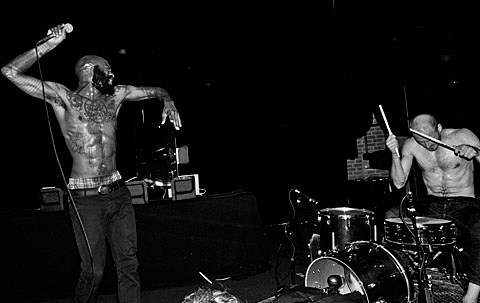 One of the bands booked to play the second day (8/3) of Lollapalooza 2013 was Death Grips, who never showed up. According to the festival's representatives (via Chicago Tribune), Death Grips "chose not to arrive in Chicago." Their set would have followed a Friday night official aftershow at Bottom Lounge, which they also didn't show up for. A representative from that venue wrote (via Pitchfork):

We are still getting bits and pieces of information but we were not aware that Death Grips was not coming until right before we made the announcement. Right now, we just want to thank all the people at the show last night who, despite being terribly disappointed that there would be no Death Grips show, were very understanding. Tickets are in the process of being refunded and people that bought tickets online will see their refunds on their statements shortly.

Apparently, as multiple Reddit users have pointed out, before the venue announced the band weren't playing, a suicide note allegedly written by a Death Grips fan was projected onto a backdrop at the venue, as Death Grips' music played through the PA. Reddit users also say that angered fans destroyed the drum set on stage, which DNA Info reports was a child's learning drum kit set up by the band's tour manager.

Death Grips' management repeatedly told Bottom Lounge employees the band "was on their way, only to be told by the same tour manager that the stage set up and the Death Grips album being played 'was the show,'" said Erin O'Neal, marketing director for Bottom Lounge. "It appears to us that despite having a signed contract, they never intended on performing last night and instead wanted to leave a room of disappointed fans."

The band themselves have not commented on the cancellations yet, but they did post a facebook post today that reads "FYF SAT AUG 24 2013 LOS ANGELES CA." That post already has multiple comments including "You guys gonna actually show to that one?" and "Great show in Chicago guys! Thanks!"

They also aren't showing up to Montreal's Osheaga Festival, which they were supposed to play this weekend as well, according to Osheaga's facebook.

UPDATE: Death Grips cancelled other upcoming dates, including the shows they would have played at Royale (8/6) in Boston and Webster Hall (8/7) in NYC with Pictureplane this week. Refunds for those shows are available at point of purchase.

You may remember that this isn't the first time Death Grips pulled a stunt like this.