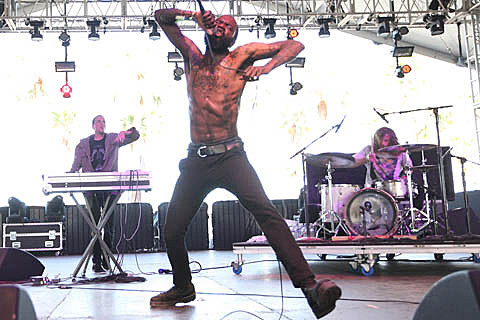 As mentioned, Death Grips are finally going on tour this fall and will be in NYC for a show on November 12 at Music Hall of Williamsburg. Tickets for that show just went on sale. The group will also be in NYC even sooner than that for CMJ, where they'll play the previously discussed show at Le Poisson Rouge on October 17 with Flying Lotus.

It's now been announced that Death Grips will also play the Pitchfork (who just awarded their new album an 8.2 today) showcase at new Brooklyn warehouse venue Villain on October 19 (50 N 3rd St), the same venue that the Brainfeeder showcase happens on October 10 during Flying Lotus' NYC takeover. More acts and details for the Pitchfork showcase (like how to get tickets) TBA.

A list of updated Death Grips dates is below.