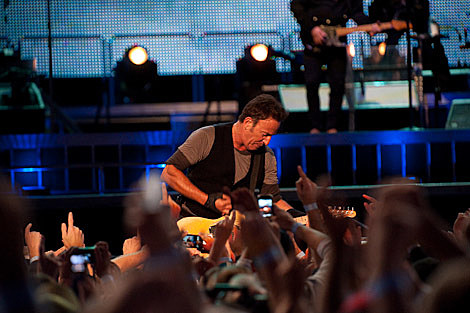 The Rock & Roll Hall of Fame concerts at Madison Square Garden scheduled for October 29th and 30th will go on without Eric Clapton. Bruce Springsteen's participation is in question due to a death in the family that caused him to cancel last night's show in Kansas City.

Lenny Sullivan, Bruce's cousin and the assistant road manager of the E Street Band for the last ten years, passed away today at the age of 36. A warm and sensitive person, he was beloved by Bruce, the Band, the crew, and the entire Thrill Hill family.

[and] Due to [the] death in Bruce's immediate family, [Monday night's] show at Sprint Center has been unavoidably cancelled. All tickets will be refunded at the point of purchase. Bruce and The Band deeply appreciate the understanding of our Kansas City audience and look forward to returning at the earliest opportunity. [BruceSpringsteen.net]

Eric Clapton won't be at MSG because he's having gallstones removed.

Van Morrison recently canceled his performance at the show as well (he was replaced by Buddy Guy). Some tickets are still available (I was able to pull up a $2600 seat for the second night)...or you can try eBay where they'll run you in the same ballpark as a World Series ticket.