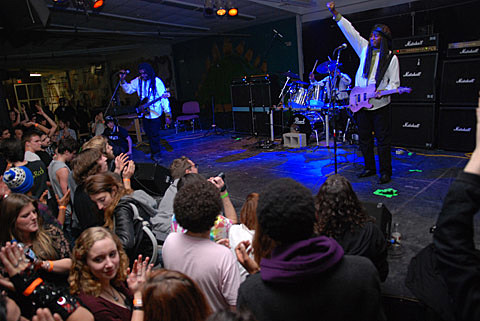 While the Duck Down vs Blacksmith showcase at Music Hall of Williamsburg is indicating that hip hop is alive and well, Afro-Punk is declaring the opposite with a show at the venue just 4 days prior. Billed as "DEATH to Hip-Hop", protopunk pioneers Death will join Cerebral Ballzy, Ninjasonik, and Jersey Klan with Stack-Aly between sets as part of a CMJ event on 10/18 at Music Hall of Williamsburg. Tickets go on sale on 9/22 at noon, or try to get in with your CMJ badge. No other Death dates to report at the moment.

In between the birth and death of hip hop, Music Hall of Williamsburg will feature another two CMJ showcases. 10/20 will see Metronomy team with Class Actress (tickets) while 10/21 is the BrooklynVegan CMJ showcase with BRAIDS, Active Child, Weekend, Pepper Rabbit, and Blue Hawaii. Tickets are on sale for our CMJ show, or be one of the people to get in with your badge.

That leaves only one hole in MHOW's CMJ schedule. Nothing has been announced there for Wed., 10/19 yet. I can't say what will happen that night, but I can say that it will be interesting (and NOT affiliated with CMJ).