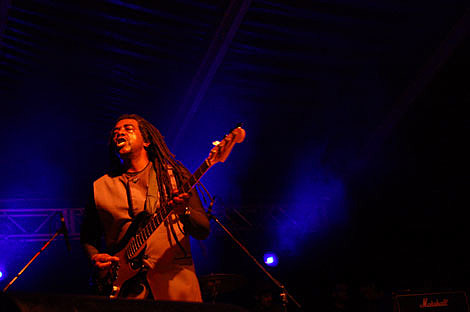 The question on everyone's mind before the set was if the members of Death (who had just reunited this year) would be able to recreate the songs on their debut album ...For the Whole World to See, despite not having played them in 35 years. While it didn't start off good with a 20 minute soundcheck, but from the opening notes that echoed into the crowd, any fears were instantly shattered into a million pieces. ...Punk dreams do come true and Fun Fun Fun Fest helps every step of the way. - [A Review of Death at Fun Fun Fun Fest by The Creative Intersection]

Proto punks Death reportedly did well at Fun Fun Fun Fest, and now the band is turning those positive vibes in to more shows, or more specifically, a NYC show. Tickets are on sale for Death with Rough Francis (they share members) at Europa in Brooklyn on April 2nd.

Death are also set to play an official SXSW showcase at the Mohawk in Austin on Saturday, March 20th. More dates TBA.

Death's only NYC reunion show so far was a short appearance at the 2009 Joey Ramone Birthday bash. The 2010 version of that show happens May 19th at Irving Plaza.

Videos of Death from FFFFest below...