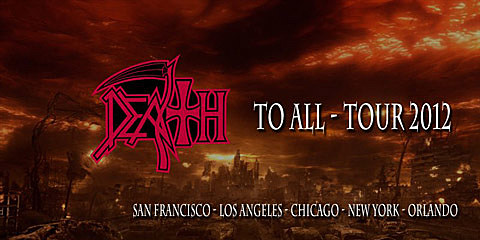 Death To All is being billed as a "tribute" to Schuldiner, who passed away more than 10 years ago. The band, which will feature Paul Masvidal, Shannon Hamm, Bobby Koelble, Gene Hoglan, Sean Reinert,Steve DiGiorgio and Scott Clendenin among others, will play a string of six US dates to benefit (20% of all ticket sales/merch) the Sweet Relief Musicians Fund which aims is to provide "financial assistance to all types of career musicians who are struggling to make ends meet while facing illness, disability, or age-related problems."

The tour includes a NYC stop at Irving Plaza on June 28th. Ticketing info is forthcoming.

All tour dates and a teaser for "Death to All" below...

Death To All Tour 2012 - In Benefit of Sweet Relief