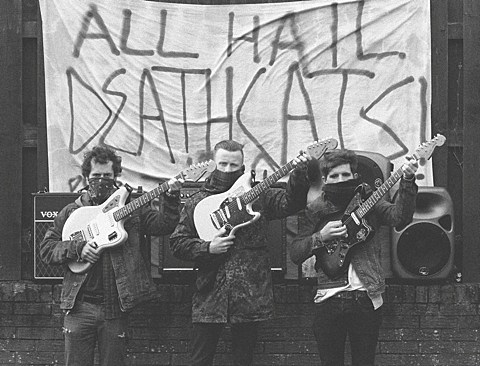 Deathcats may hail from Glasgow, but their sound is hardly Scottish. These guys making rippin' garage rock that sounds straight of San Francisco, or at least Detroit. There's just a bit of psych in there too -- anyone who digs The Sonics, The MC5 or newer torchbearers like Ty Segall and Thee Oh Sees should give this a listen. They're releasing their debut album, All Hail Deathcats, next week (6/9) via Fuzzkill Records. You can pre-order it now, but if you want to check it out first, you can do so by listening to the full LP stream which premieres in this post.

Deathcats also have a European tour coming up, including an album release show in their hometown with fellow Glasgow rockers Pinact. All dates on that tour are listed, with the album stream, below...