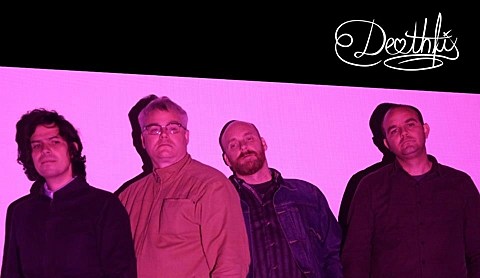 Washington, DC's Deathfix, the new project of Brendan Canty (of Fugazi, Rites of Spring), Rich Morel (of Blowoff with Bob Mould), Devin Ocampo (of Smart Went Crazy, Faraquet, Medications) and Mark Cisneros (of Medications), who we caught at Fun Fun Fun Fest 2012, are set to release their self titled debut album on February 18 via Dischord Records, the home of most of the members' past projects. The members may all have backgrounds in heavier bands, but from the sound of the album's single, "Transmission," Deathfix are pulling from the lofty harmonies and melodic ramblings of '60s psychedelia. They even break out into a Stoogey sax solo at one point. Pretty great stuff. You can stream that track below.

Deathfix will support the new record with a tour that brings them to NYC on March 16 at Knitting Factory. Tickets for that show go on sale Friday (1/11) at 10 AM.

A list of all tour dates and that song stream below...