Deathwish Inc. -- Jake Bannon of Converge's increasingly influential record label -- are following up what I can only imagine was their most lucrative year of operation to date (they released Deafheaven's Sunbather) with their first-ever standalone music festival. Creatively entitled Deathwish Fest, the bash will take place on July 22 and 23 at the Sinclair in Cambridge, MA. Both nights will be headlined by Converge (no surprise there) and Trap Them, who are preparing to release their first new album since 2011's Darker Handcraft. Both bands are restricting their 2014 Boston-area appearances to this fest. Some other notables include Modern Life Is War, Code Orange Kids, & Doomriders on 7/22 and Oathbreaker & Cult Leader (who will evidently be touring together as well; keep an eye out for updates here).

Tickets for individual days go on sale this Friday (4/11) at noonwith an AmEx presale beginning Wednesday (4/9) at noon. Two-day passes are $50 and if that math doesn't make sense to you, it's because you're not taking the Jake Bannon limited-run silkscreen print that comes with the two-day pass into account. Fans of wings, skulls, and splatter textures rejoice! Check out the full fest lineup below. 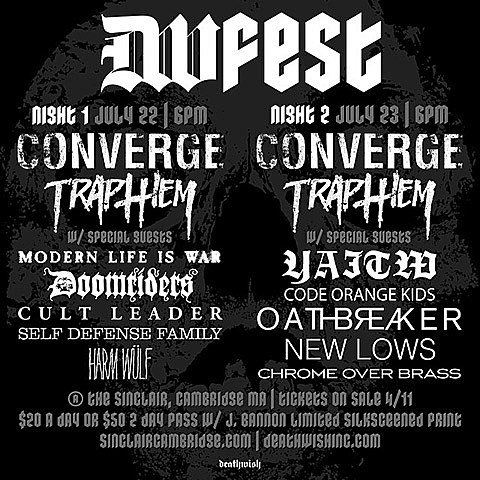