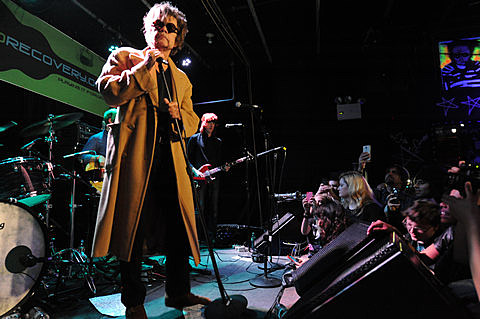 "Chairs for the evening are Chuck Close, Maggie Gyllenhaal, Peter Sarsgaard, Arden Wohl and Uma Thurman. Proceeds support the work of the Tibet House US, a non-profit educational institution and cultural embassy founded at the request of His Holiness the Dalai Lama to ensure the survival of the unique Tibetan civilization."

It will be Debbie's only performance before she plays a sold out 10-show run at NYC's Café Carlyle (March 24-April 4).

Meanwhile, fellow CBGB legend and singer of the NY Dolls David Johansen will be taking on his Buster Poindexter persona for his own two week residency at Café Carlyle which begins tonight (February 10-21). Tickets for most nights are available at Ticketweb.

Patti Smith, who also plays the Tibet House benefit (again), was in LA last week for two big shows at the Ace Hotel Theatre, and for one intimate one at the Roxy.
LA Weekly reports:

There was the all-star turnout, for starters: Morrissey, Johnny Depp, Tim Robbins, Thurston Moore, Susanna Hoffs, Rosanna Arquette, Rodney Bingenheimer, Diplo, Jimmy Iovine, and gusting through the Roxy's back entrance (nearly knocking us over) to join Iovine just before showtime, Pharrell and his entourage.

The Roxy's VIP section has seen its share of celebrities, of course, but this bizarre mixed bag was hard to miss. Even Patti herself took notice, dedicating one of her first numbers to The Moz and later speaking of Iovine's influence and production on her acclaimed album Easter, a moment which led into a highlight of the evening, a bewitching rendition of "Because the Night."

LA Record has a review and pictures from one of the Ace Hotel shows. Video of her covering "Smells Like Teen Spirit" at one of them, below...