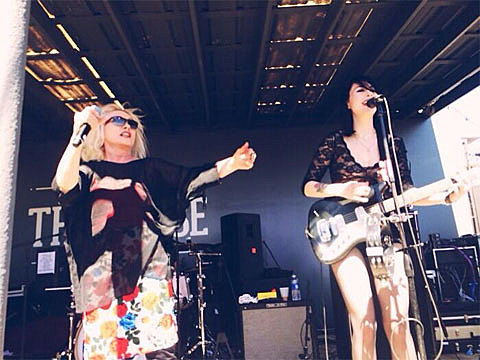 Blondie's Deborah Harry just surprised the audience of a Spotify SXSW event by showing up on stage to play "Dreaming" with Dum Dum Girls! Picture proof above.

Blondie, who also play the Rachael Ray day party while they're in Austin, play their official SXSW showcase at Brazos Hall Thursday night (3/12). Not in Austin? You can stream the whole show live courtesy of the Smithsonian Channel...

Smithsonian Channel is sponsoring Blondie's South By Southwest (SXSW) live performance from Yahoo's Brazos Hall on March 13th to support the upcoming world premiere of BLONDIE'S NEW YORK, a one-hour documentary that explores the rise of the legendary band.

Smithsonian Channel Presents Blondie Powered By Yahoo, a rare live performance by the iconic band, will be available to fans across the country via a LIVE stream on Smithsonianchannel.com and on Yahoo Screen and on mobile via the Yahoo Screen app on Thursday, March 13 beginning at approximately 11:45pm CST.

Speaking of Spotify and SXSW, check out our playlist.