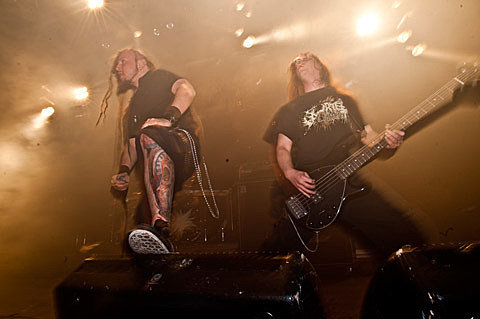 Polish death metallers Decapitated are heading out on tour in 2016 with two like-minded Seattle bands, classic-minded death metal act Black Breath and grind maniacs Theories. The tour will stop in NYC for a show at The Marlin Room at Webster Hall on 2/4, and tickets for that show are on sale now.

For Decapitated, this headlining tour comes right before they do a US run opening for At the Gates. Their latest release is 2014's Blood Mantra.

Black Breath are still on the road behind their standout 2015 album Slaves Beyond Death, and Theories put out their debut LP Regression earlier this year on Metal Blade. These two bands also toured together earlier this year with Goatwhore and Ringworm.

Check out music videos for Decapitated and Theories, a live Saint Vitus set from Black Breath, and all tour dates, below...