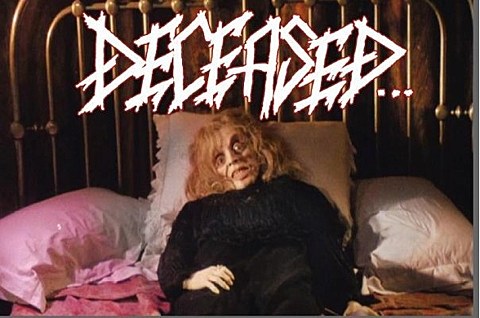 With one notable exception, the metal world was dominated by older acts in 2013. We're not halfway into December yet, but 2014 is already piling up notable live appearances by legacy acts. Dark Angel, At the Gates, Candlemass, Pungent Stench, plus scads more have been announced for Maryland Deathfest; Metal Church and Morbid Saint have upcoming shows scheduled; and now long-running (since 1985!) death/thrashers Deceased have announced a NYC show happening at Saint Vitus on February 15. Support will come from Fantom Warrior, Penetration, Sacrificial Blood, and Exhumation. Tickets are on sale; no other dates have been announced so far.

Unlike virtually all of the aforementioned bands, Deceased have been active consistently for their entire existence; only a scattered handful of years have gone by since their inception during which they didn't release something new. (Incidentally, they played with Morbid Saint during that band's 2012 NYC appearance.) They haven't changed a whole lot over their 28-year run, but they've gotten really, really good at what they do, and they always deliver live. This show should be a ripper.

Stream a song from their most recent album, 2011's Surreal Overdose, below; compare it with their 1991 debut, Luck of the Corpse, just for fun.