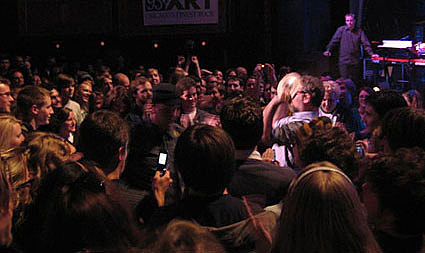 The Decemberists were supposed to play their first of 2 NYC shows at the massive Terminal 5 tonight (Nov 1, 2007), and at least one of the shows was sold out....

With much regret The Decemberists have cancelled the remainder of "The Long and Short of It" tour.

One of our band members has been ill for a while but we thought all would be well in time for these tour dates. After a couple shows, though, it has become clear that the illness is much worse than we had initially realized. We need to return home so our friend can mend.

It saddens us to disappoint our fans. We hope everybody understands it is only because of an extreme situation that we had to cancel a tour we've all been excited about doing since the idea was originally hatched.

Our deepest apologies but at this time no plans are being made to reschedule the dates. Ticket holders should seek refunds at poin of purchase.

I hope it's nothing serious. They had to recently cancel some European dates for the same reason.