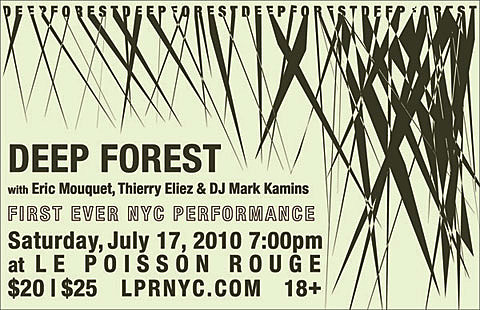 Few Grammy winners have never performed in the United States. Fewer still sell more than 10 million albums worldwide without doing so. But a decade-and-a-half after grabbing a Grammy for Best World Music Album, ethnic-electronica outfit Deep Forest is headed our way.

Musical history [was] made in Boston Wednesday night when Deep Forest [made] its American debut as part of a Bastille Day celebration at the Beehive.

"Yes, it's true," Deep Forest co-founder Eric Mouquet said by phone from Paris. "I have played everywhere in the world except for the U.S.A." [Boston Herald]

More info and tickets (currently not sold out) at Le Poisson Rouge's site.