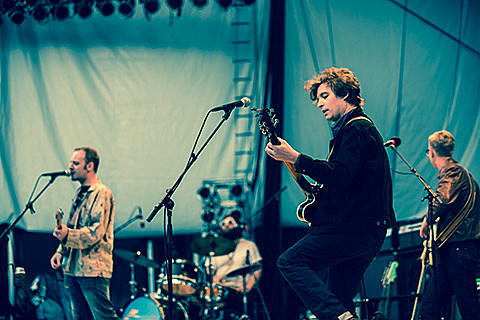 Deer Tick, IamSu! and Dum Dum Girls are part of a free new holiday EP being released by Converse Rubber Tracks titled Noise To The World 2. It's being released digitally this week in three installments:

You can stream the Deer Tick and GRMLN songs now in this post. There will also be free live performances at brick-and-mortar Converse stores this week, including NYC at Converse Soho on Thursday (12/4) at 6 PM with Dee Dee of Dum Dum Girls backed by Ice Choir (ex-TPOBPAH drummer Kurt Feldman's synthpop project). In addition to a couple holiday songs, there will be a "full DDG set as reimagined by Ice Choir." Could be interesting! At these shows you can also pick up vinyl of Noise to the World 2 which includes two exclusive covers: Dum Dum Girls doing Wham's "Last Christmas" and GRMLN taking on "Blue Christmas."

Deer Tick's 10th Anniversary celebration run at Brooklyn Bowl is coming up between Christmas and New Year's, and tickets are still available for every show except New Year's Eve.

Deer Tick and GRMLN song streams, and a list of all of this week's Converse Noise to the World in-stores around the country, below...