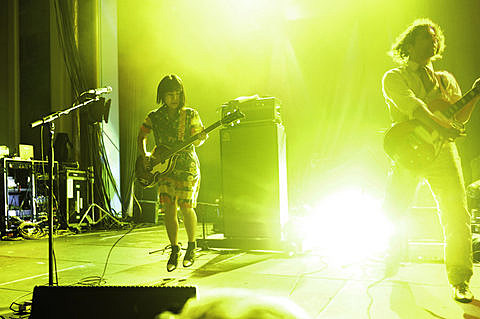 The fourth Tinderbox Music Festival, "an annual event showcasing a powerful and diverse lineup of established and emerging female artists producing innovative original music," is returning to NYC on November 1 at Music Hall of Williamsburg. It's being headlined by experimental band Deerhoof, and also features sets by a bunch of local artists, including the shoegazey Butter the Children, the punky Aye Nako, the synth poppy Half Waif, the friends of Yeah Yeah Yeahs Dynasty Electric, and more. Tickets for the fest go on sale Friday (9/13) at noon with a Ticketmaster presale starting today (9/9) at 4 PM. Full lineup and the list of all Deerhoof tour dates are below.

Aye Nako have other shows coming up, including an opening slot on the Bowery Ballroom (9/16) stop of the Waxahatchee, Screaming Females, and Tenement tour (tickets) and our BrooklynVegan-curated Red Bull Sound Select show on September 30 at Music Hall of Williamsburg with The Bouncing Souls, Gaslight Anthem frontman Brian Fallon and more TBA (admission is $3 at the door).

Butter the Children also play another local show on October 7 at Cameo with Neighbors, Teen Girl Science Monthly, and Clarence. Tickets for that show are on sale now.

Full Tinderbox 2013 lineup, the list of Deerhoof dates, and some song streams, below...

Butter the Children - "Spit It Out"