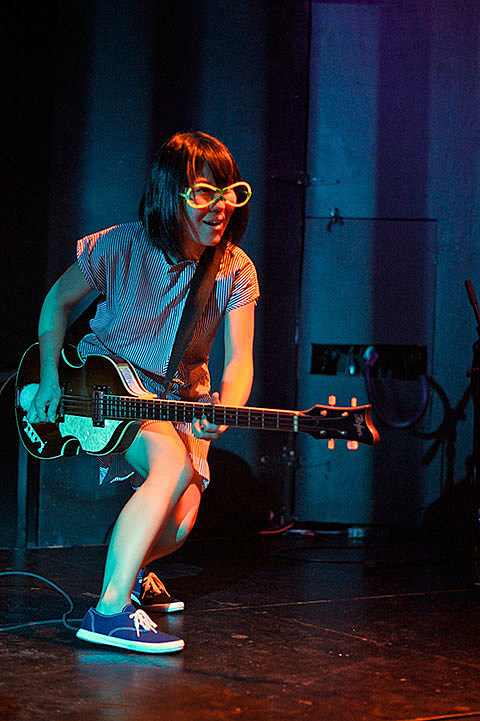 Deerhoof will welcome their new split/collaborative 7" on Saturday (11/6), featuring Busdriver and Physical Forms (Busdriver plus members of The Mae Shi). Preorder that now. Deerhoof's new full length LP, Deerhoof Vs Evil, being released on 1/25/11 via Polyvinyl/Joyful Noise. And it's around that time that the band will go on a headlining tour with Nervous Cop, and Ben Butler & Mousepad. All dates below.

Recent NYC shows were at Le Poisson Rouge and Williamsburg Waterfront (collaboratively with Xiu Xiu). Deerhoof will return to one of those venues in March, but first skip the conventional venues to play Ridgewood Masonic Temple on February 8th, 2011 with all of the openers mentioned above (the same venue that Todd P just hosted a Halloween party at). The March show is actually after the tour, on March 14th at Le Poisson Rouge, and is entitled "Deerhoof & Friends: A musical event within Carnegie Hall's 2011 JapanNYC Festival, presented by Wordless Music." Not much else is known about the rest of the LPR lineup, but tickets are now on sale.

But wait, there's more: Check out this thing starting at the Kitchen in NYC TONIGHT

"Just a friendly reminder about The Kitchen's U.S. premiere this week of BAND, Adam Pendleton's new three-channel video installation. Pendleton's BAND is a form-and-content refashioning of Jean-Luc Godard's Sympathy for the Devil, which stands in open contrast to the earlier film. BAND tracks the indie rock band Deerhoof working on and recording a new song, I Did Crimes for You over the course of a day during the Toronto International Film Festival in 2009. Using the structure and techniques of avant-garde film as a means to explore ideas about contemporary experimental practice, language and the (re)making of history, BAND acts as a meditation on the present, read backwards through the canonical traces of history. The exhibition also features new wall-based works from Pendleton's ongoing System of Display series.

The trailler for BAND, Deerhoof's full tour schedule and some other videos, below...