Greg on stage with Deerhoof (more by Chris Gersbeck) 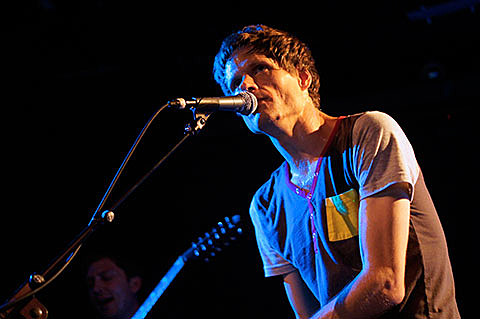 We already knew that we could catch the very talented Greg Saunier of Deerhoof at one of two upcoming NYC shows (Ridgewood Masonic Temple on 2/8 with Buke & Gass and Le Poisson Rouge on 3/14-tickets), but we can also see the Deerhoof trapsman extraordinaire THIS FRIDAY, 2/17, at Bruar Falls. It doesn't look like Saunier will be behind the kit though, but he will be manning the drums... on a drum machine if the billing of the show is correct. Bruar Falls lists it as "SARA MAGENHEIMER (WOOM) AND GREG SAUNIER (DEERHOOF) DRUM MACHINE IMPROV DUO. The show kicks off at 8PM and will also feature sets by The Psyched and Antimagic. WOOM won't play the show, but they do have dates coming up elsewhere which are listed below. All Deerhoof dates are in a previous post.

This is not the first time Woom and Deerhoof will have collaborated either...

Last July the duo WOOM released their debut album, Muu's Way. Since then, word of mouth has been spreading about the chaotic, tender, startlingly original world the album creates. The band's reputation has grown slowly but persistently at the edge of visibility, like a slime mold spreading across the parking lot of modern independent pop music. So who is it listening to WOOM? Well, take for example some of their biggest fans: the musicians featured on this new release, Muu's Way Remixed.

Deerhoof's Greg Saunier takes on the underwater pop splash "Quetzalcoatl's Ship". Adding stuttering distorted drums, his version rolls the song like an over-ripe melon down a rocky hill in the hot sun. His longtime collaborators, Xiu Xiu, have a remarkably different take on the same song, chopping and looping to create a moody piece of midnight electro-minimalist doom.

Listen to the whole EP on Soundcloud. Download Greg Saunier's take on "Quetzalcoatl's Ship" above. Full tracklist, and WOOM's new video for "The Hunt", is below. 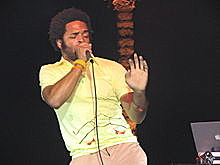 In related news, the "driver" half of Deerhoof's "Hoofdriver" project (that 7" is out now) will play two nights at Southpaw as part of "Search And Restore & Manhattan New Music presents...4 nights of Kneebody". Kneebody's four night residency will feature two sets from the band each night, and will take place on 1/26 -1/29 with Wayne Krantz on the first night (tickets), Busdriver on board for the second night (tickets), Busdriver & Mark Guiliana on the third (tickets), and Daedelus on the final night (tickets).

It's not the first time that Kneebody and Busdriver have collaborated for a show or on stage; in fact, the pair were in NYC in February for Kneebody's four day residency at Bleecker St Theater. Videos of the two artists playing together are below.

If you can't make it to catch Daedelus at Southpaw, you can still catch him support Lotus with Tobacco at Terminal 5 on February 5th. Tickets are on sale. Lotus is also on board to play Mercury Lounge the night before, and tickets to that show are currently on sale as a package with the Terminal 5 tickets.

Full tour dates and everything else below...

KNEEBODY LIVE AT THE SUNSIDE IN PARIS

WOOM: The Hunt from Double Triple on Vimeo.