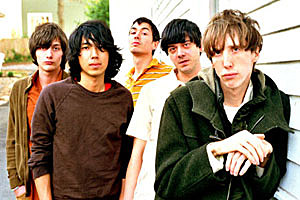 Deerhunter's new ambient-psych-rock-something-like-that album Cryptograms is out this week. I like it a lot. Prefix and Cokemachineglow describe how it sounds, and the drama involved in making it. I'll just say that Deerhunter have songs streaming at their MySpace, and you could probably imagine them fitting right in to a Grizzly Bear/Papercuts/Beach House show.

Deerhunter fit in to that lineup so well in fact that they ARE playing with Grizzly Bear and Papercuts when that tour hits Deerhunter's hometown of Atlanta, GA. Unlike NYC though, Beach House is not at that show, but Deerhunter will play with them too - at Pitchfork's SXSW party ("Best New Music" coming any second? update: yes).

Do not confuse Deerhunter with Deerhoof who also have a new album out.

Deerhunter's upcoming NYC show is at Mercury Lounge on April 26th. All tour dates and a video below....