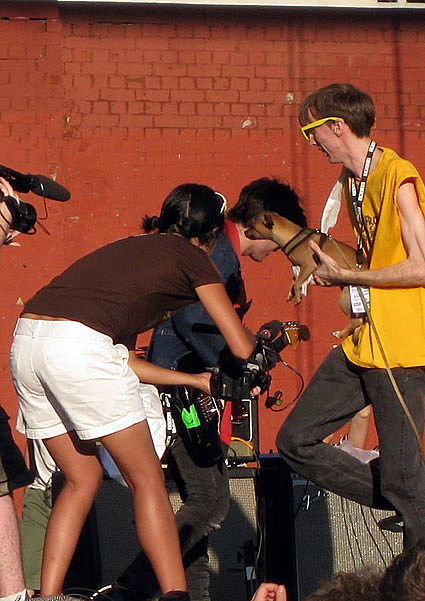 "Over the weekend, Cox, doing what he's done countless times before, gave away free music on his blog, this time in the form of a "Virtual 7-inch" that contained two Atlas Sound songs. The only problem was that this time, when fans attempted to download the tunes, they somehow ended up also downloading the entire contents of Cox's MediaFire account (he had accidentally left it unlocked) -- which included demos, song sketches, two fully completed albums and a whole bunch of photos of his friends and family.

Naturally, when that material began to make their way around file-sharing sites, Cox reacted much in the same way anyone would: He sort of lost it, posting (and then deleting) a series of messages on his blog that ran the gamut from denial to anger to bargaining and finally, at around 3 a.m. Sunday morning, acceptance. Basically, he rifled through the entire grieving process in a little more than 12 hours. Could he have taken a step back, perhaps counted to 100, or physically separated his fingers from the keyboard? Yes. Did he? No. And maybe neither would you or I, for that matter.

Of course, on Monday, when I wrote about the entire incident on MTV's Newsroom blog, I wasn't considering any of that. I basically recapped the entire event in a condescending tone, put words in Cox's mouth (the whole "Blames You" headline), and did not bother attempting to contact him for further comment or clarification. I was irresponsible and one-sided. In other words, I covered the whole thing the way your average blogger would...." [says MTV's James Montgomery]

The "Monday" that James (not your average blogger) refers to was two days ago. On Tuesday (yesterday), this happened:

"Today, more than two months before its physical release, Deerhunter's third LP Microcastle has made its way to the iTunes Music Store. The disc is still due in physical form October 28 via Kranky in North America and October 27 on 4AD in the rest of the world, but it remains an iTunes digital exclusive until then. [Pitchfork]

BUT more importantly, even more Deerhunter tour dates were announced in addition to the recent last minute Mercury Lounge show and in addition to the upcoming tour with Times New Viking that includes two more NYC shows. The new (to this site at least) NYC date is September 9th at Le Poisson Rouge. That's less than three weeks away. Tickets are on sale I think. All dates below...