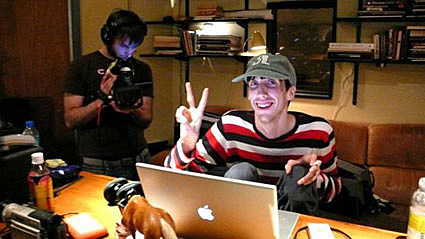 Deerhunter made an appearance on Living Bridge, a compilation put together by Rare Book Room Records. The song that appeared on the compilation was entitled "After Class" and was recorded in the same place where they attempted to record their second album, the Rare Book Room studios. It was released in February 2008.

The quartet's third album, slated to come out in 2008, will be titled Microcastle. One of the songs from the record, whose title has been confirmed as "Twilight at Carbon Lake", has been described by Cox as "doo-wop, 50s/early 60s, Everly Brothers".[10] Microcastle leaked on the internet May 31, 2008.

The band added guitarist Whitney Petty, a former cheerleader and high school friend of Cox's, to replace the departing Mee in May 2008. [Deerhunter Wikipedia]

You might just have the leak. If not, you can hear some of the new songs streaming at Deerhunter's official MySpace.