Deerhunter @ Pier 54 over the summer (more by Natasha Ryan) 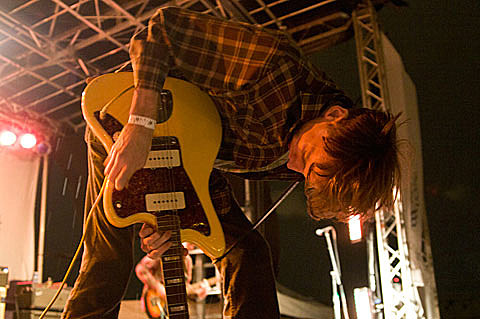 Deerhunter will release a new album, Halcyon Digest, on September 28th via 4AD (the band's first on the label). You can also stream the whole thing now at NPR. The Bradford-Cox directed video for "Helicopter" is viewable below.

To help promote that album release, Deerhunter will play some last minute free shows in major cities. Chicago gets an Urban Outfitters-sponsored show this Friday, 9/25, "at 4:00 p.m. at the underpass at 560 W. Grand @ the Chicago River under the Kennedy overpass." NYC gets:

And actually that's it. If you don't live in Chicago or NYC you'll have to wait until the larger, less-free October and November Deerhunter tour (which also goes back to NYC and Chicago).

Tickets are still on sale for the October 15th show at Webster Hall with Real Estate. All dates and that video, below...