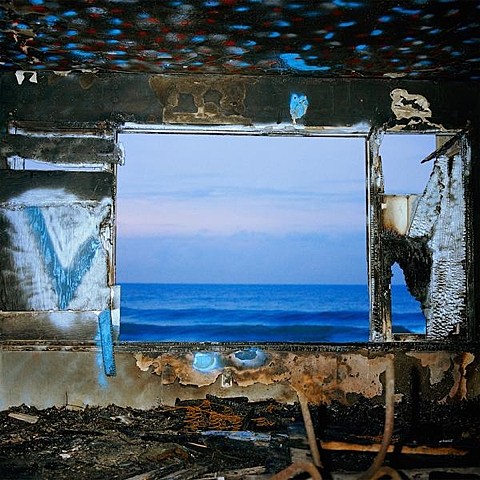 Deerhunter have tried out almost every subgenre of underground rock that you can think of, but if I had to say, it was never better than the dream and psychedelic pop of 2010's Halcyon Digest (a sound their side projects further explored with Parallax and Spooky Action at a Distance). Last time around, 2013's Monomania, they took a detour into glammy garage rock, but their newest and seventh full length Fading Frontier sounds like the natural followup to the Halcyon/Parallax/Spooky Action era, and it's great to hear them doing this stuff again.

With nine songs in 36 minutes and no individual track crossing the six-minute mark, it's their shortest album since Turn It Up Faggot. There's no towering album-defining track like "He Would Have Laughed" or "Nothing Ever Happened" or "Octet" or "Monomania" this time around, no intros, and hardly anything resembling an interlude. But they've already made plenty of sprawling, unfurling records; this one is their most concise yet. And it works, because every song is its own beast.

The sound effects and driving backbone of album opener "All The Same" pick up where "Don't Cry" left off, and then "Living My Life" moves from downtempo electronics into big sunny pop in a way their pal Panda Bear would be proud of. They take on whimsical '60s-style psychedelia with the keyboards in "Duplex Planet," get their early-'70s Bowie on with the strummy art rocker "Carrion," and come closer to straight-up disco than ever before on "Snakeskin" (which, as by far the funkiest song on the record, turns out to be a red herring of a lead single).

Fading Frontier is diverse, but what the songs have most in common is that they're some of Deerhunter's most subtle. "Monomania" is defined as "exaggerated or obsessive enthusiasm for or preoccupation with one thing," and "exaggerated or obsessive enthusiasm" is exactly what that album sounded like. For this new album, Bradford tells Pitchfork, "I've seen enough in my lifetime; the frontier has faded," and that kind of contentedness comes through on these songs. They're also some of their cleanest and clearest songs yet, and the vocals are pushed to the forefront more than ever. Don't let that make you think they're toning things down creatively though. If you're a Deerhunter fan, this album is filled with instant classics, and if you've gone this long without ever hearing them, it's not a bad place to start.

The album is out today via 4AD. Listen via Spotify/Rdio and check out the videos for three songs below. The band is on tour now, with two sold-out NYC shows happening in December.