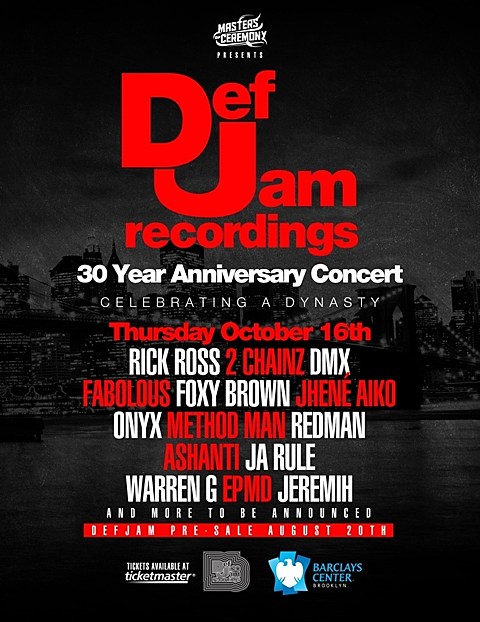 Def Jam Records, the label responsible for some of the most influential hip hop ever released (Beastie Boys, Public Enemy, Kanye West, much more), is celebrating its 30th anniversary this year and in honor of that they'll throw a big show at Brooklyn's Barclays Center on October 16. It's got a lineup of artists from throughout Def Jam's history as a label with legends, currently-rising artists and plenty in between, including Rick Ross, 2 Chainz, DMX, Fabolous, Foxy Brown, Jhené Aiko, Onyx, Method Man, Redman, Ashanti, Ja Rule, Warren G, EPMD, and Jeremih. Tickets go on sale Friday, August 22 at 10 AM with AmEx/Radio/Venue/Promotor/Ticketmaster presales starting Thursday, August 21 at 10 AM.

Def Jam is also releasing two versions of a limited edition box set in honor of the anniversary, which "will include Selections From The Roots of Def Jam, which is curated by Rick Rubin and features music that inspired him to create the label, as well as a two-volume compilation of Def Jam Recordings' Greatest Hits." 'Def Jam 30' video below.

Method Man will also be part of another big Barclays Center show on September 20, when his group Wu-Tang Clan play their show with Bone Thugs-N-Harmony, Lil Kim, The Diplomats, Curren$y and Dom Kennedy (tickets).

Method Man and Redman are also playing Best Buy Theater on November 26. Tickets for that show go on sale Friday (8/15) at noon. UPDATE: The show's actually part of this year's Smokers Club tour.

EPMD were also added to the NYC stop of Dirtybird's 'BBQ tour' which happens on Sunday (8/17) at 50 Kent with Claude VonStroke, Justin Martin, Kill Frenzy, Christian Martin, Justin Jay and Ardalan. Tickets are on sale for that show.

We also mentioned that Jeremih is playing a free NYC show with Run the Jewels this month, for which RSVP is now closed.