Dave Hill rocking out to Poison 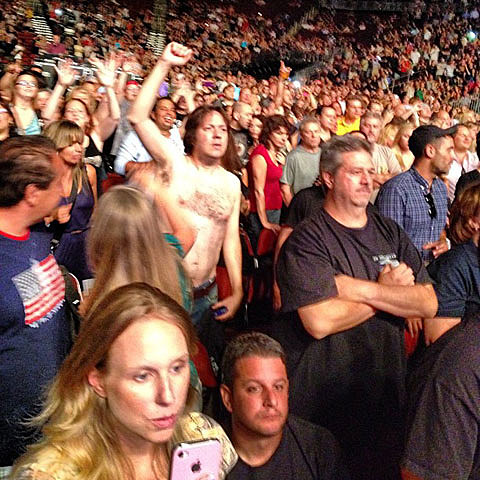 Last night (7/11), I went to see Def Leppard, Poison, and Lita Ford at the Prudential Center, which is in Newark, New Jersey. What happened was my friend Ryan asked me and my friend Dave if we wanted to go to the concert and we were both like "Fuck yeah!" and the next thing I knew, we were totally on a train to New Jersey about to get our asses handed to us by Def Leppard, Poison, and Lita Ford, the bands that were playing the concert.

There were roughly 15,732 people in attendance at the show but I was definitely the most rocking person in attendance and you can basically ask anyone because I pretty much owned that show from the second we got off the train in Newark, at which point we walked briskly to the Prudential Center because we were fucking pumped to rock out and everyone around us was looking at us like "Those guys fucking rule!" We had black rock shirts on and everything. It was fucking sweet.

As it turned out, we were kind of late for Lita Ford so by the time we got down to our sweet seats (which were RIGHT ON THE FUCKING FLOOR, SECTION B, ROW 7 MOTHERFUCKERS!!), Lita Ford was playing her last song and basically her biggest hit ever "Kiss Me Deadly," which was great. At the end of her set, Lita Ford told all of us in attendance how awesome we were and I was just like "Yeah, I know, Lita Ford" cuz duh. Also, it should be noted that I would totally have sexual intercourse with Lita Ford if she is reading this, which I hope she is (NOTE: If you personally know Lita Ford and can send this on to her, please do, because I am a real catch and would treat her like fucking gold).

After Lita Ford finished rocking everybody, Ryan, Dave, and I headed up to the concession area and drank like six or eight beers or something I don't even know. Also, Dave had to take a piss, which was fucked because I was afraid we might miss Poison but everything was fine. After Dave finished taking what turned out to be basically the longest piss of all-time or something, we went back down to our sweet seats and watched Poison. If you like Poison, you would have definitely liked seeing them last night because they basically nailed it as far as being Poison goes. They played all the big rocking hits like "Talk Dirty to Me" and "Unskinny Bop" and all that but then they also brought it down by playing "Every Rose Has Its Thorn", at which point I was practically crying like a fucking baby because, man, the words. I still ended up holding it together in the end but most of the chicks seated around me totally wanted to make out with me because chicks fucking love that sensitive shit.

After Poison finished and a bunch of stuff exploded and stuff, Ryan, Dave, and I headed back up to the concession area and had like 14 more beers or something. It was nuts but we couldn't help it because we were so pumped for Def Leppard it wasn't even fucking funny. By then, I had to take a piss too so I went into the bathroom and did my best to ignore the fat guy in the New Jersey Devils jersey shaking his dick next to me for like five minutes straight as I tried to focus on rocking out to Def Leppard pretty much any second now. 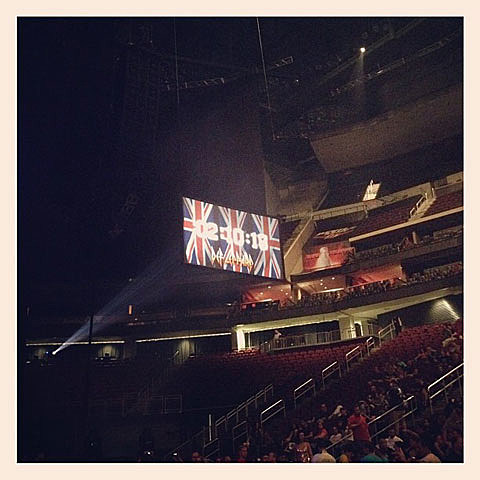 Once we got back down to our sweet seats again (7TH FUCKING ROW, MOTHERFUCKERS!), it was fucking Def Leppard time and then sure as shit, fucking Def Leppard came on stage and started rocking the fuck out of everyone in the fucking place and that shit was nuts. Def Leppard opened with some new song which was still awesome but basically bullshit considering the fact that you know they've got "Foolin'", "Photograph", "Rock of Ages," and about 500 other hits locked and loaded the whole time and they could have played one of those tunes but whatever it was still sweet. A few songs into things, Def Leppard played "Love Bites" and I was singing along with every word and every chick in my section wanted to bang me because I was fucking nailing that shit so hard you would have thought I was in the fucking band, which I probably should be the more I think about it (NOTE: If you are in Def Leppard and are reading this and also want me in the band, just tell me where the bus is parked and my fucking gig bag and I will be there. Also, we should play some more songs from "High and Dry" cuz that shit rules). It should be noted that the Def Leppard guitar player Phil Collen was shirtless the whole time and so was I and I'm pretty sure he saw me and made a gesture to the singer Joe Elliott like "Check that dude out in Section B, Row 7- he is owning this fucking place." And I was. Ask anyone. 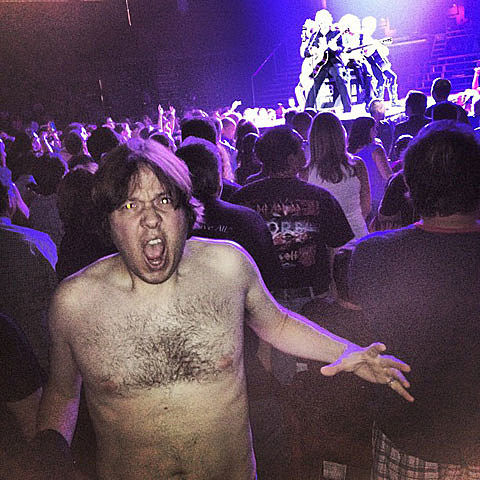 About halfway through their show, the Def Leppard guys all broke out acoustic guitars and sat on a road case brought out by a sweet roadie with a hat on and played some song that I didn't know but it was a real panty dropper that's for fucking sure. A lot of chicks wanted to make out with Def Leppard and also me at this point but we had a show to focus on so we couldn't. It should also be noted at this point that the Def Leppard drummer only has one arm. I realize pretty much everyone knows that already and I am totally used to seeing him play drums like that but when he's just walking around the stage with one arm part of me couldn't help but be all like "Oh, shit- he's coming over here."

After Def Leppard got done showing their sensitive side, it was time for the fucking hits. They played "Women," "Bringin' on the Heartache", "Armageddon It" ("Are you getting it? Yes, I'm a getting it!" It fucking ruled), "Photograph", and basically every other fucking awesome Def Leppard song you can fucking think of. It was at this point in the show, that I ended up meeting this other sweet dude who was rocking out to Def Leppard almost as hard as I was. We high-fived and rocked out and sang every fucking word and basically no one around us could even handle it. You could tell the guys in the band saw us and were like "Fuck- that is some next level shit right there" as we were fucking owning that fucking show so hard. Def Leppard played "Rock of Ages" and then Ryan, Dave, and I got the fuck out of there cuz we had a train to catch back into NYC. I guess you saw this coming, but before we got on the train we fucking knocked back a cold one in the bar in the train station. There were a lot of people who were also at the show at the bar and you could tell by the way they looked at us that they all knew we were the fucking sweet dudes from Section B, Row 7. It ruled. Next time Def Leppard comes back to town we are totally going again and that shit is going to be awesome basically. If they play two nights I would even go both nights. 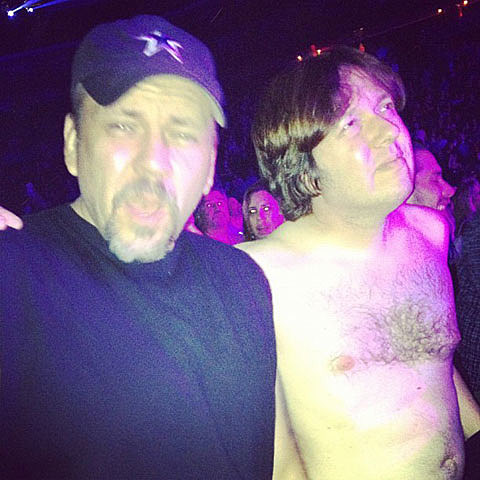 Def Leppard, Poison, and Lita Ford play Jones Beach in Long Island this Friday (7/13). Tickets are still available. Unclear if Dave will again be in attendance. The tour hits Atlantic City on Saturday. They're back in NY to hit Buffalo and Saratoga Springs in August. All dates at Def Leppard's website.

Dave Hill will be promoting his new book Tasteful Nudes in Austin on Saturday (7/14). You can catch him in NYC when the "Dave Hill Explosion" returns to UCB Theater on July 26th. A few more pictures of Dave rocking, below... 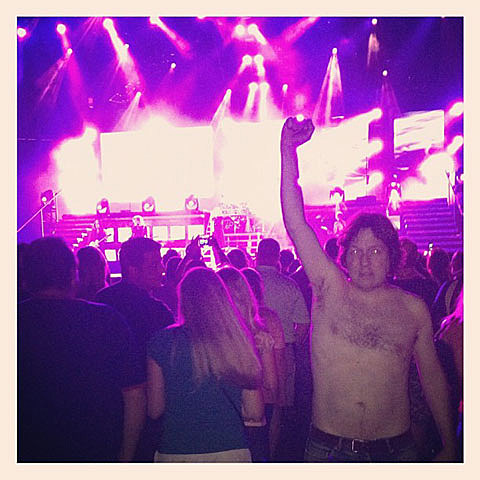 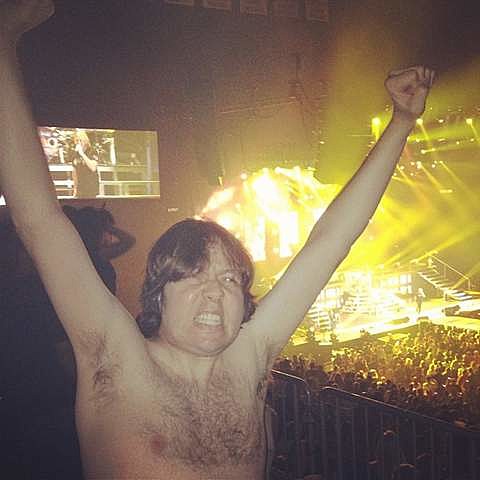 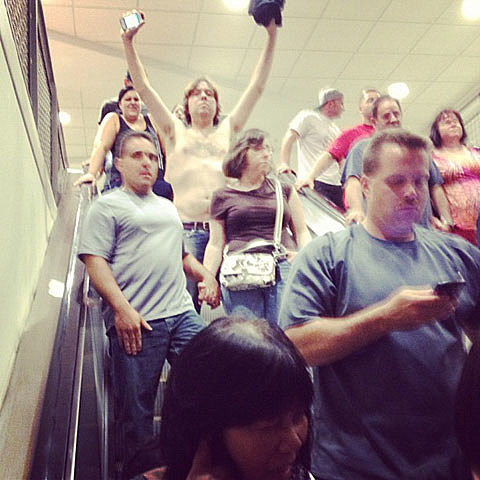 You can also catch Dave Hill: