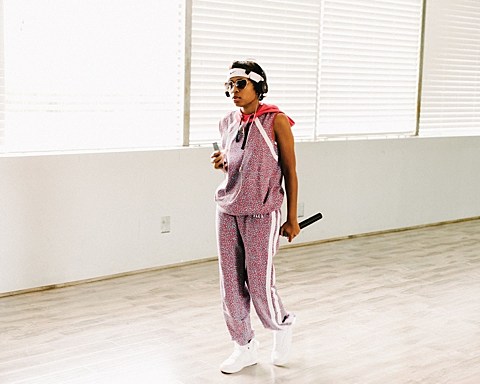 Dej Loaf, who may or may not be the future of hip hop, has scheduled a NYC show happening at SOB's on Monday (12/8). It's the next edition of Hot 97's "Who's Next?" series and also features Boldy James, Kiyanne and Spank Jus Bizness. Tickets are on sale now.

Dej recently played her single "Try Me" on The Tonight Show with Jimmy Fallon with The Roots, which you can watch below. was also one of the many Detroit rappers featured on Eminem's song "Detroit vs Everybody" from his new Shady Records compilation, Shady XV. Also on the song is Danny Brown, Big Sean, Royce da 5'9" and Trick Trick. You can listen to that below too.

That's the same compilation where Eminem threatened to rape Iggy Azalea in a song: "So what's it gon' be? Put that shit away Iggy. You don't wanna blow that rape whistle on me. Scream! I love it. 'Fore I get lost with the gettin' off." That song came out not long after Em said he'd punch Lana Del Rey in the face in a freestyle. Keepin' it classy, Marshall.

Speaking of Iggy, Azealia Banks took to Twitter once again to fire a slew of angry tweets at her. This time it was to say she doesn't care about black people. She wrote, "its funny to see people Like Igloo Australia silent when these things happen... Black Culture is cool, but black issues sure aren't huh?" and "Don't just be down to ride Black Dick..... If you with us you WITH US!!!!" She also tweeted a "Christmas Carol" which was deleted but Buzzfeed still has up: "I'mmmm Dreeeeaaming Of a Whiiiiiiteee Racisttttt !!!" Iggy's response: "we've all read the script 49584068408540 billion times now, find a new game plan." She then suggested to her followers that they sign petitions, protest or donate and provided some productive ways you can help.

Meanwhile, both Iggy AND Eminem (and Macklemore) better step back, says J. Cole.