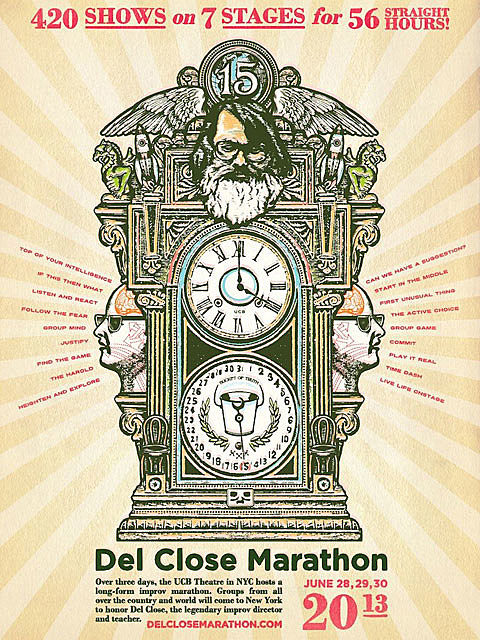 Well, it's that time of year again. No, not July 4. Not the official beginning of summer. Not even the weekend. I'm talking about the fifteenth annual Del Close Marathon, happening June 28 - June 30 in NYC.

Del Close was a seminal improvisor and comedian who trained some of your favorite comedians - think Amy Poehler, Bill Murray, Tina Fey, John Belushi, and Stephen Colbert. Every year since 1999, the Upright Citizens Brigade Theatre (Amy Poehler, Matt Besser, Matt Walsh, Ian Roberts) have hosted a three-day festival in his honor. This year, it's back and bigger than ever, with six stages and 420 unique shows for your comedy nerd enjoyment. You can grab a wristband at any of the six stages, which will cover all but premium shows (at FIT and SVA theaters). More info on wristbands and tickets can be found at DCM's official website.

As always, this year's lineup features some great teams from around the country (Boston, DC, Chicago, LA, Austin), and around the world (Tokyo! Fucking TOKYO!). In addition, a bunch of television and movie stars who got their starts at the theatre are performing in their natural habitats - Ellie Kemper (The Office), Nick Kroll (The League, Kroll Show), Amy Poehler (SNL, Parks & Recreation), Zach Woods (The Office), Mike Birbiglia (Sleepwalk With Me), Adam Pally (Happy Endings), and Bobby Moynihan (SNL), to name a few.

Here are a few highlights:

Play By Play, Friday 9 PM at UCB Chelsea - Like sports announcers who wandered into a comedy theater, veteran improvisors Kevin and Will Hines perform color commentary on an improv set featuring some of the UCB's top improvisers.

The NY Mets Monoscene Spectacular, Saturday 4:45 AM at UCB Chelsea - Darryl Strawberry (Chris Gethard) leads the members of the New York Mets, past and present, in a patient, well thought out Monoscene that takes place at the Mets' home stadium, Citifield.

Nick Kroll and Friends, Saturday 7:30 PM at Haft Auditorium (separate tickets needed) - Nick Kroll (The League, Kroll Show) does improv comedy with some of his friends for your laughing pleasure.

We Can Fix You!, Sunday 6:15 PM at UCB Chelsea - Tell the UCB4 (Matt Besser, Matt Walsh, Amy Poehler, Ian Roberts) and Owen Burke your problems and they'll try their hardest to fix them.

ASSSSCAT 3000, Sunday 8 PM, 9:30 PM, 11 PM at UCB Chelsea - the UCB4 perform their classic improv show with guest monologuists from SNL, The Colbert Report, The Daily Show, and more. While all three shows are sold out, you can wait in standby for each one and get in with your DCM wristband.

As always with DCM, expect four to five hour lines before big shows at UCB Chelsea. Bring a snack, bring a book, bring a water bottle, and bring your game face. Another good tip to remember - if a show is sold out or just too expensive ($20 for each premium show!), wait on standby and you can get in with your DCM wristband. Good luck and godspeed, fellow comedy nerds.

Make sure to follow @BVComedy on Twitter for live updates of the best shows, tips during the festival, and all other essential coverage of DCM15.