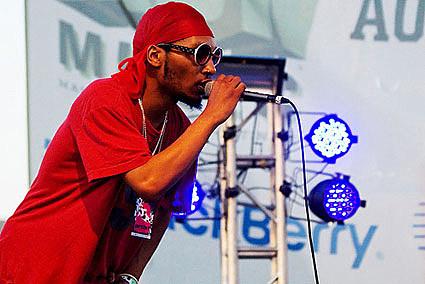 South by Southwest has always been known as a music festival that flourishes with indie-rock bands, singer-songwriter types, classic blues players, metal acts and even some country artists. But hip-hop? Not so much.

That's been changing thanks to SXSW music programmer Matt Sonzala, who has worked steadily to increase the profile of rap at the festival, which hosts hundreds and hundreds of acts each year. Among the 150 hip-hop performers at this year's event include Ice Cube, Bun B, The Clipse, Dizzee Rascal, 2 Live Crew, Talib Kweli, and the Cool Kids.

"Honestly I didn't know too much about this, and people would say, 'What -- you don't know what that is? ... If you don't go, you trippin'!'" said Del the Funky Homosapien, playing SXSW for the first time this year. "That's when I started realizing." [Associated Press]

Tickets are still on sale for the Del show happening Wednesday night (March 26) at Highline Ballroom in NYC. Check out a video from SXSW below....