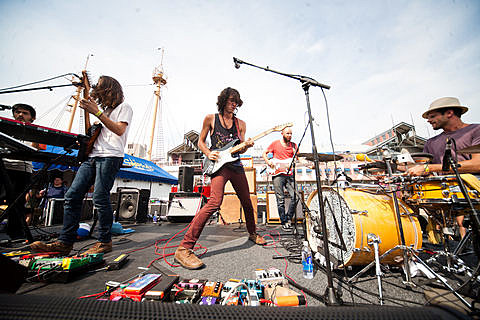 Delicate Steve was among the performers scheduled to play GoogaMooga on Sunday that didn't end up happening on account of rain. For those who were especially looking forward to his appearance and don't mind waiting a while longer, Delicate Steve will play NYC at Glasslands on September 6. The rest of the bill is still TBA but tickets are on sale now. Steve also recently provided music for a drawn-on-film animated short called "Tallest Heights and you can watch that below.

Delicate Steve's only other 2013 date is part of the snowboard community-related Friendly Gathering Festival which happens in Windham, VT on June 28 & 29 and also features, Assembly of Dust, Rubblebucket and others. Full line-up is below.

Tallest Heights from The Lincoln Motor Company on Vimeo.