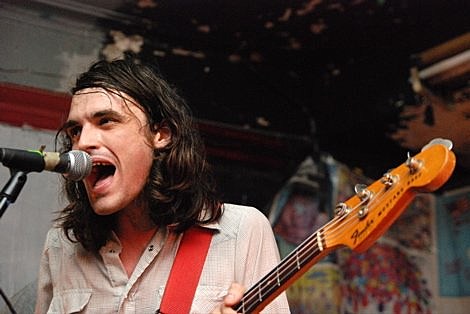 The Barcelona-based synthpop crew Delorean isn't originally from Barcelona, and they didn't start out as a synthpop crew. The band began in the Basque country, playing emo with a heavy Elliott Smith influence. It's taken them eight years, three albums, and remixes for the likes of El Guincho, the Teenagers, Glasser, and the Big Pink to get to where they are right now, but where they are right now is a pretty glorious place.

On their brand new BNM'ed EP Ayrton Senna, they play a deliriously sundazed but seriously hooky form of dance music, with liquid house pianos and burbling bass that dissolve beautifully into each other. These days, the band drops New Order's name more than anyone else's, and it makes sense. Not too many bands can pull off New Order's fusion of open-hearted emotional melodicism with dancefloor intensity, but Delorean is one of them. [Pitchfork]

Delorean was last in town for CMJ, and the one show I saw of theirs was definitely pretty glorious. They return in March of as part of the previously-announced Miike Snow tour that goes from Texas (March) to California (April). Tickets are still on sale for the NYC shows at Music Hall of Williamsburg and Webster Hall. All dates, with Delorean's list of albums and remixes, below...