Delta Spirt @ Emos' Outside in October (more by Tim Griffin) 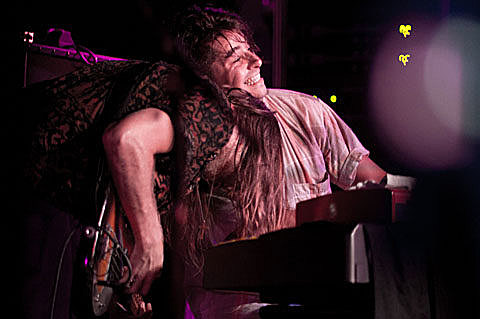 As we mentioned they would yesterday, tickets went on sale today for the 50th anniversary Preservation Hall Jazz Band show at Carnegie Hall which will feature guest appearances by My Morning Jacket and many others.

My Morning Jacket's big headlining Madison Square Garden show is now exactly two weeks away and there's still time to not only buy a ticket, but to win a pair from us as well. Band of Horses open the show.

Delta Spirit, who are opening other dates of the MMJ tour, will grace us with a new full length soon:

Delta Spirit announces the release of their self-titled record out March 13, 2012 on Rounder Records. Delta Spirit was produced by Chris Coady at Dreamland Recording Studios - a converted church built in 1896 in Woodstock, New York. The album follows 2010's History From Below and 2008's Ode To Sunshine.

"We found the sound that we've been looking for, that we've been growing into, and as soon as we hit on it, we ran with it. That's why it's a self-titled record, so we could connect our identity with what we think Delta Spirit is," says singer/guitarist Matt Vasquez.

Through the recording process the band grew their sound sonically, inspired to use instruments they had not previously experimented with. The album's raucous energy and no-holds barred performances will appeal to Delta Spirit's fan base, which has grown consistently thanks to their explosive live shows.

Fans will have a chance to get a sneak peak of the new material during Delta Spirit's exciting December run of dates supporting for My Morning Jacket. Stay tuned for 2012 headlining dates.

Meanwhile, if you don't have it already, you can download and listen to Delta Spirit's very first EP (released 6 years ago) for free in exchange for your email address in the widget below...