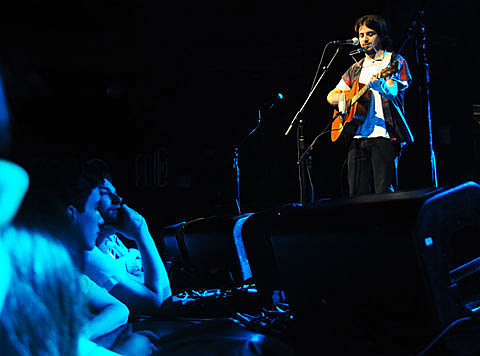 Delta Spirit are on tour now, and tickets are still on sale for their headlining show at Webster Hall tonight (Tuesday, 11/23). Dangerbird-signed LA band Darker My Love (who share members with the 2007 incarnation of the Fall and who also have a song on that Target Christmas album that WAVVES/Best Coast is on) and Long Beach band The Fling open the show and the tour.

Delta Spirit just released a new EP entitled the The Waits Room which you can download now on iTunes, and get on limited edition vinyl at the merch table. Yourstru.ly, who posted a video of the band performing "Bushwick Blues" for the EP, has the story...

"Hidden in the hills of Northern California lies the bucolic town of Cotati, CA. Unbeknownst to many, a musical landmark exists there called Prairie Sun Studios, where many incredible musicians have rattled and hummed, including the venerable Tom Waits himself. And, just this year, Delta Spirit stepped into that very studio to record their soulful rocker, History From Below. In the midst of recording, the band discovered "The Waits Room," a gutted closet on the studio grounds where the man himself records to this very day. Echoes abound, the room creates a sound that reverberates until your body is lulled to rest. Although a full-fledged studio space exists, where most of the album recording took place, with roomsound like that, the band couldn't help but record tracks in there from time to time. In fact, it was such a gorgeous sound, ideal for Delta Spirit's folk-blues bliss, that they recorded an entire live EP in it. The result is the Waits Room EP, a 5-song burner..."

The "Buswhick Blues" Waits Room video with all dates (in text and special video format), below...