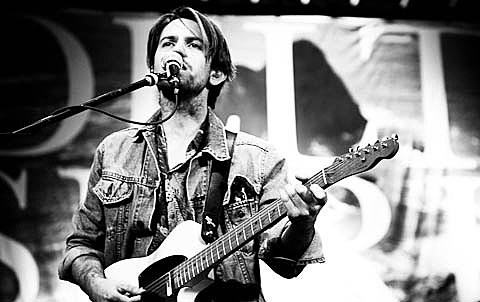 Delta Spirit, who was just in NYC for a show at Central Park Summerstage with Dr. Dog and Kishi Bashi on Thursday (9/20), are taking a short break, but then they'll head back out on a headlining tour this fall. Previously, that tour didn't include any NYC shows, but now that the Summerstage show has passed, they've added a date happening at Irving Plaza on November 27. Support for that show and many other dates on the tour comes from two pretty great garage rock bands, FIDLAR and JEFF The Brotherhood. Tickets for the NYC show go on sale Friday (9/28) at 10 AM with Citi Cardmember, Live Nation, Live National Mobile App, and Music Geeks presales starting Thursday (9/27) at 10 AM. All dates on the tour are listed below.

Earlier this month, FIDLAR released a revamped version of their song, "Cheap Beer," which you can download above (via P4K). As soon as I heard the MP3, I was instantly transported back to walking into the back room at Public Assembly for the 2011 BrooklynVegan CMJ party that FIDLAR played, where I was greeted by a packed crowd and four rowdy punks on stage screaming, "I DRINK CHEAP BEER SO WHAT FUCK YOU!" The song will be on their debut LP, due out in early 2013 via Mom & Pop. They're a ton of fun, as are BV faves JEFF the Brotherhood, so if you're heading to that Delta Spirit show, getting there early to catch the openers is highly recommended.

A list of all dates and a recent HearYa Live Session of Delta Spirit performing "California" are below.