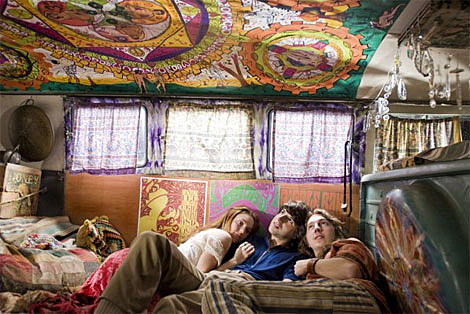 While [Woodstock Ventures'] most promising idea -- a one-day mini-Woodstock in Prospect Park in Brooklyn this August -- fizzled when they could not find sponsors, that doesn't mean others haven't coaxed a few more marketing miles from the creaky Woodstock bus.

Dozens of projects are planned to commemorate the August 1969 concert, including an Ang Lee movie called "Taking Woodstock" [starring Demetri Martin, trailer below], a Heroes of Woodstock concert tour (with Jefferson Starship and Melanie) and at least 13 books, including one for children co-authored by a second cousin of Max Yasgur, the farmer who lent his land in Bethel, N.Y., for the original event. Target is set to run a "Summer of Love" promotion featuring licensed Woodstock merchandise, like beach towels with the symbolic white dove perched on a guitar neck.

The operators of the Bethel Woods Center for the Arts, on the grounds of the original Woodstock concert, gave up trying to work with Woodstock Ventures and announced on May 4 that they were going ahead with their own commemorative concert Aug. 15, called the Bethel Woods Music Festival, which will include acts from the Heroes of Woodstock tour.

...[Woodstock promoter Michael Lang] has not given up hope that he can pull off another last-minute event. He said they were speaking with a potential sponsor and city officials for a free concert in Prospect Park in the fall. "We would have 150,000 ticketed and an overflow area for 150,000 more with video screens," he said, speaking more animatedly when the logistics of a show were being discussed than he was when the subject was finding sponsors and working out issues with Mr. Rosenman.

"It would be noon to 11 p.m., eight to 10 bands on the main stage," Mr. Lang continued. "On-site solar and wind power; biodiesel for generators; organic and local produce; recycled paper goods. We'd like to give away one-day free passes on city transit with a ticket." [NY Times]

Taking Woodstock, a film whose cast also includes Liev Schreiber, Emile Hirsch, Eugene Levy (as Max Yasgur) and others, is set for summer release on August 14th -- one day before the Fest's official 40th on August 15th.

As stated above, that's far from the only thing celebrating Woodstock this summer. Tickets are on sale for The Bethel Woods Center show. Levon Helm (who hosts regular jam sessions in his Woodstock, NY studio), Jefferson Starship, Canned Heat and others are on the bill.

And as stated above, many of the acts at that event will be traveling with the Heroes of Woodstock tour. That show has dates across the US, including a Wednesday, August 12th show at NYC's Nokia Theatre Times Square. Tickets are on sale.

NYC is also hosting its own set of Woodstock anniverary concerts at Castle Clinton, with four nights of free music planned. That kicks off with the Music of Sly & the Family Stone: "It's a Family Affair" on Thursday, July 16th.

Not actually related, but close enough... this weekend (May 29th-31st) in the Catskills, not too far from Woodstock, Mountain Jam is happening in Hunter, NY. Bands on the bill include the Gene Ween Band, The Hold Steady, Girl Talk, Coheed & Cambria, Gov't Mule, Allman Brothers Band and more. Tickets are still on sale.

One place that won't be having a "Woodstock" anniversary event is San Francisco, where its tribute concert organizers were recently served with a cease and desist order from Lang and Woodstock Venture for using the trademarked name.

Check out the trailer and poster for Taking Woodstock, with all Demetri Martin and Heroes of Woodstock dates, below... 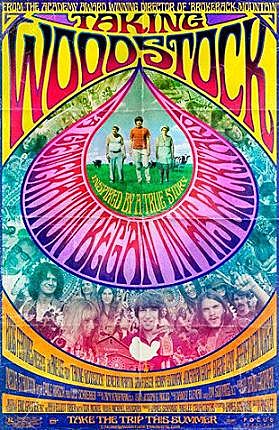