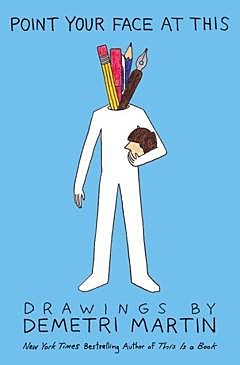 Demetri Martin is set to release his second book, Point Your Face at This, on March 13 which "contains hundreds of drawings, jokes, and page-long bits, showcasing Martin's particular penchant for brevity and a sensibility all its own." Demetri will be going on tour to support the book's release and that will include five NYC area shows: the NYCB Theatre in Westbury, NY on March 8; Wellmont Theatre in NJ on March 9; the Tarrytown Theatre in Tarrytown, NY on March 15; Gramercy Theatre on March 18 and The Bell House on March 19.

Tickets to his Gramercy Theatre and NYCB Theatre shows go on sale Friday (1/25) at 10 AM; as do tickets for his Bell House and Tarrytown show. Tickets to the Wellmont Theatre go on sale Friday at noon. All Demetri Martin tour dates are listed below.

While on the subject of funny people, you may have seen on our "tickets on sale" post today, Fred Armisen is playing Bowery Ballroom on February 19 and tickets went on sale today and are still available. At the time we were "not exactly sure what he'll be doing" but Fred was kind enough to write in to say that the show will be "some comedy, some drumming, and some friendly guests!" So there you go.

Fred likes to drum, as you may know, from his time spent behind the kit in Trenchmouth, to his character Jens Hannemann's "Complicated Drumming" instructional videos, to his recent appearance with Yo La Tengo on Late Night with Jimmy Fallon, which you can watch below...