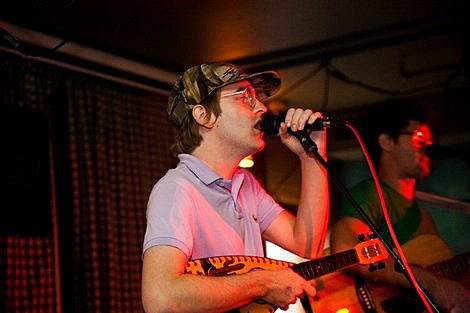 A few nights earlier, I tried and failed to see Dent May at a late-night show, but I figured I'd give it another shot, so I headed over to the Cake Shop after the BrooklynVegan CMJ show at MHOW Thursday night, and was delighted to see that they were running on schedule. I thought I was tired at that point, but I've got to hand it to Dent May and his friend Bobby for their dedication to the cause. "We drove 20 hours straight to be with you. Our car got towed. We've been threw a lot of shit, and we love it," May said by way of introduction. A quick look at Bobby's zombie-like stare as he sat, waiting for the show to start, revealed just how tired he was. In addition to their lengthy sojourn to New York, it was their last show of the week and the third of the day. Luckily, their music is upbeat and undeniably catchy. When they started to play, they sprang to life, and many of the people in the audience began to dance.

Dent May doesn't have any more dates on his schedule, but he is on the lineup of the just-announced All Tomorrow's Parties curated by Animal Collective taking place May 13th-15th at at Butlins Holiday Centre in Minehead, UK. Full initial lineup announcement below...

We are very pleased to invite one of the most exciting indie success stories of the last decade to curate the only ATP festival weekend of May 2011. Animal Collective's last album Merriweather Post Pavilion was hailed with universal acclaim; 5 Stars from Uncut, 8/10 from NME and a 9.6 from Pitchfork, who also named it their album of the year and put it in their top 20 albums of the decade. ATP promoter Barry Hogan: "I always wondered what kind of mixtape Animal Collective would put together, so we are really stoked that they are climbing into the curating hot seat at Butlins next May where they will headline and curate the festival that includes the likes of Lee Scratch Perry and Gang Gang Dance from an already eclectic mix of 40+ acts."

The first announcements chosen by Animal Collective for the line-up are:

with far more to be announced!

Tickets for ATP Curated by Animal Collective are priced at £165.00pp for room only and £175.00pp for self catering and go on sale this Friday 29th October at 9am from www.atpfestival.com