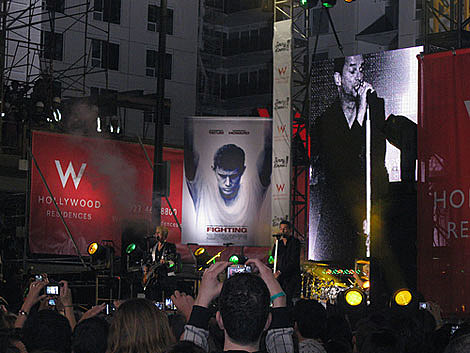 [The band] drew more than 12,000 people to Los Angeles' famed corner of Hollywood and Vine, the largest crowd gathered there since the show first launched in 2003 with a performance by Coldplay. The band played seven songs in just under 45 minutes, including "Wrong," the first single off their latest album, Sounds Of The Universe, along with fan favorites "Personal Jesus," "Enjoy The Silence" and the set's closing number "Never Let Me Down Again," during which singer Dave Gahan led a sea of Depeche devotees to reach for the sky before humbly bro-hugging his right-hand man of nearly 30 years, Martin Gore. [Rolling Stone]

Depeche Mode have a North American tour with Peter Bjorn and John scheduled for this summer. That includes a pair of Madison Square Garden shows on August 3rd and 4th. The band is also headlining Lollapalooza in August.

Videos, official and unofficial, from the LA show, below...